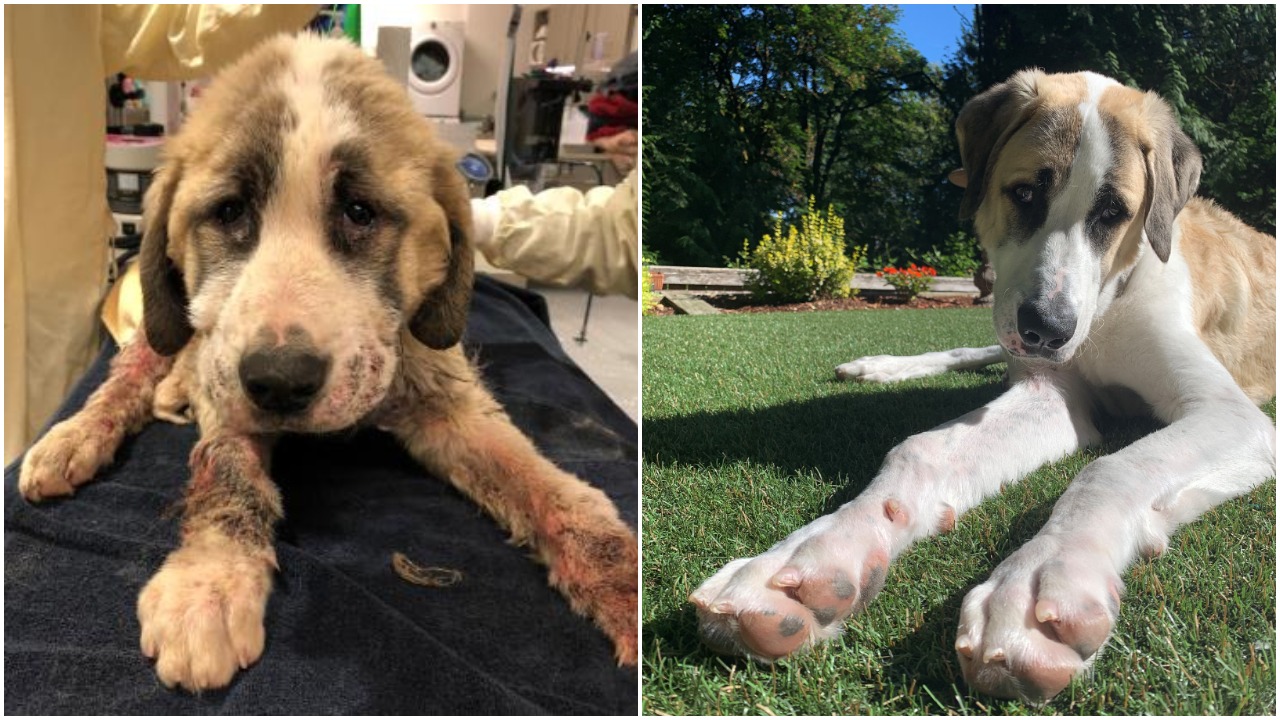 No one knows how he came to be standing in the middle a rural road in Eastern Washington near Royal City or how long he’d been trying to survive out there -- in the middle of nowhere -- on his own. What is certain is that the starving Saint Bernard mix pup likely had just hours to live when a man headed home after a weekend of duck hunting saw him and stopped on January 26, 2020.

Chris Babbitt could see the dog was horribly emaciated and had blood on its legs. He knew immediately the dog needed help, but could only find one shelter willing to take the dog – Seattle Humane – more than 150 miles away. “It was on my way home and I knew they would take him and they did,” Babbitt said.

Veterinarians at the shelter quickly set to work on saving the dog’s life starting with the horrible skin infection they could see under his fur -- 90% of the young pup’s body was covered with open ulcers and bleeding, infected wounds. The pup’s future looked grim, but they gave him a name anyway – Ducky – for the duck hunter who found him.

Realizing the dog needed around the clock care, Dr. Krystal Price, one of Seattle Humane’s veterinarians, took Ducky home with her. He made it through the crucial first few days, but still had a long journey before he would have the strength to eat and walk on his own again. Once Ducky was ready for a foster home, Seattle Humane asked one of its longtime foster volunteers, Evelyn Barron, if she would take over his care.

She did and Ducky not only continued to survive, but thrive. His skin healed and his coat grew back. A healthy diet put much-needed weight on his rapidly-growing body. Perhaps most important of all, Ducky learned to trust and to love. He shared Evelyn’s home with another dog named Klaus and a cat named Madame Cuddles. Evelyn’s videos posted on Facebook of Ducky’s journey back to health delighted the Seattle Humane foster community.

Once thoroughly healed, Ducky was ready for adoption. It was at that moment that Evelyn realized the now 100-plus pound pup she’d taken in months earlier had already found his forever home – hers. She and her husband formally adopted Ducky on April 2, 2020.

Now 10 months old, Ducky spends his days romping in the yard, chasing butterflies, playing with his dog buddy Klaus, and welcoming new foster pets into his home. “He’s a huge dork and we love him,” said Evelyn. “We just couldn’t have given up such a nice boy.”

Charity Name
The Humane Society for Seattle/King County
Photo Caption
Ducky was in terrible shape when he arrived at the shelter. Now he is a happy, healthy dog living his best life.
Photo Credit
Seattle Humane
CFC Number
88226