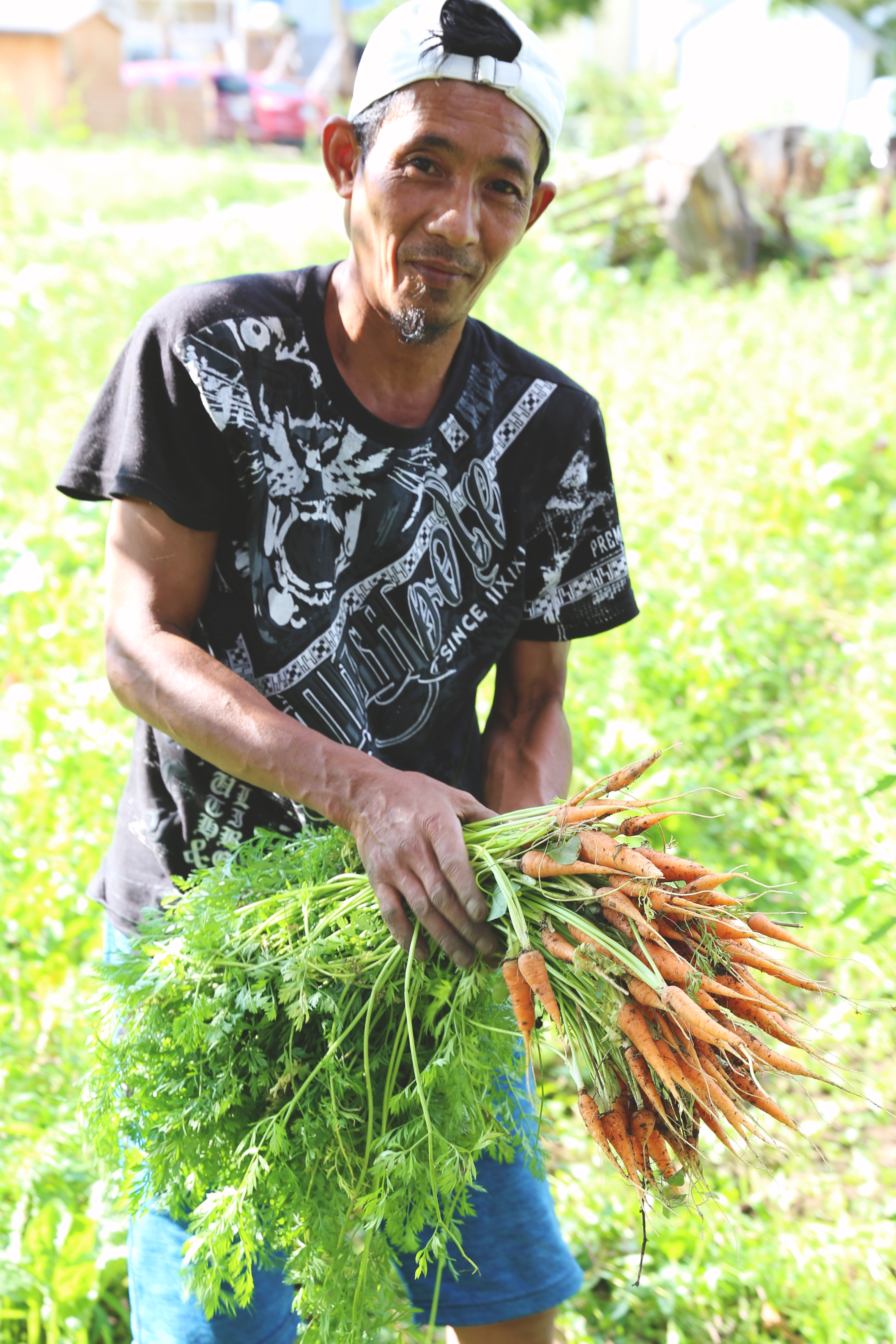 Swa Dit and Mee Nge are graduates of the New Roots for Refugees program and learned to farm at Cultivate KC’s Juniper Gardens Training Farm
When in search of Swa Dit and Mee Nge’s urban farm in Northeast Kansas City, it’s a “blink and you’ll miss it” kind of quest. The front yard, visible from the street, resembles that of its neighbors: a basic lawn with trimmed grass. The backyard, though not seen from the street and passersby, is where the real care is taken. Although they farm in another leased lot, in their small backyard there are rows growing tomatoes, peppers, a variety of herbs and alliums.
Elsewhere, with more acreage, they grow potatoes, kale, chard, beets, carrots, radishes, lettuces, spinach and arugula. In addition to the marketable produce, they grow long beans, chin baung and water spinach. “We eat everything we grow,” Mee Nge said.
Their parents grew food, the refugees from Burma said, but the skills they use as farmers they learned from training at Juniper Gardens in the New Roots for Refugees program. They’ve only considered themselves farmers for four years, when they joined the program. “We never planted before,” Swa Dit said, with his daughter Habay Dar translating.
In their fifth year as “official” farmers, Swa Dit and his wife Mee Nge, have left Juniper and faced challenges including how to keep their produce fresh after harvesting. They received help from Cultivate KC. Each year Cultivate KC provides local farmers and growers with grants to improve their infrastructure. Thanks to generous donors, Cultivate KC awards nearly $20,000 annually so that local farmers can expand their capacity in the community.
In 2017, Swa Dit and Mee Nge received one of those grants for $3,000 to purchase the supplies for walk-in cooler on their farm. The cooler was assembled over the course of a day in May by volunteers from St.Louis-Kansas City Carpenters Training Facility. During construction, Mee Nge had cookies, tea and other refreshments out. The family was elated to host and watch the installation.
“We are so happy,” Swa Dit said. “It’s good for our vegetables. They can be kept inside and kept fresh. It makes our work a little easier.” “It is hard for us to start our own business,” Mee Nge added. “It was hard for us. We are glad for Katherine helping build a cooler for us. So for that we thank her a lot.”
Swa Dit and his wife share farming tasks, but the whole family is involved in the business. At the City Market on Saturdays, Swa Dit, Mee Nge and usually a couple of their children come to sell. The children help set up and work, but also provide translation when needed. They hope they can pass along their training to their children. “We want it to be a family business,” Swa Dit said.
In the summer of 2019, Swa Dit and Mee Nge also opened Sone Ze Ya restaurant in the historic Northeast area of Kansas City. There you can taste traditional and delicious Burmese cuisine including mohinga, a noodle soup flavored with lemongrass and fish sauce; as well as coconut curry soup, fresh papaya salad, potato curry-stuffed sambusas and crispy fried chicken with sticky rice. The dishes are made with fresh produce, much of which they grow themselves, making Sone Ze Ya a true and unique family-farm-t0-table restaurant.